Let me preface this post by saying that this humble theory is the product of three individuals, Cody O’Brien, Garrett Lam, and I. What began as an exchange of whimsical ideas soon developed into a coherent stream of thought into which all of our previous fragments of ideas fit. It seemed strange that all three of us reached such a empathetic level of understanding, something that’s never happened to such a degree despite being friends for many years. It seemed even stranger to me that this theory encompassed all of my various thoughts over the years. Everything seemed to come together in this one theory that we call Transliminism, literally, to cross the threshold.

Let us begin by asking the question, “What is the value of human life?” Don’t confuse this with, “what is the purpose of human life?” I define value as a certain quality that not only characterizes but gives meaningful worth to something. To answer this question, compare a human to an amoeba. I think, with my limited knowledge of biology, it is fair to say that amoeba’s have no consciousness since they lack the necessary organic machinery. The amoeba is not aware of its existence. It is simply an organic chemical reaction that will carry out until its death.

Because the amoeba lacks a consciousness, which I believe is the only link to the metaphysical realm that we currently know of, it remains at the base level of metaphysical meaning. Whether dead or alive, existing or nonexistent, the amoeba will always remain at that basic threshold. What characterizes amoeban life is the presence of a biological reaction that controls everything it does. 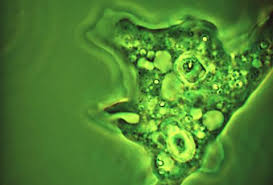 Humans, on the other hand, do indeed possess a mind and a consciousness. We are able to transliminate, to cross the threshold. The value of human life lies in our ability to cognate and think, which I interpret as functioning in the metaphysical realm. Our emotions, intuitions, and sense of fulfillment are all connected to this metaphysical realm, a world beside the physical world we perceive around us. Humans are born into the physical world, transitioning from nonexistent to existent, at this basic threshold. The fundamental difference is that we have the ability to rise above the base level if we choose. Now, how is that accomplished?

Let me first establish some petty but necessary dialectics. I view happiness as different than meaning. Some say that happiness is the purpose of life, but I strongly disagree. I will address this argument in more detail in another blog post, but for now I will say this. Happiness is merely another human emotion, next to love, despair, and excitement. I think a lot of people also use the term happiness to denote a deep feeling of contentedness and satisfaction with their current existence. But I call this deeper, more metaphysical feeling meaning. I use “happiness” to describe more mundane, capricious experiences that offer short term satisfaction. I use “meaning” to describe profound, spiritual experiences that offer eternal satisfaction.

Back to the main subject. Humans can rise above the basic level of metaphysical meaning simply by actively seeking meaning. But this is not a simple task. It requires a deep understanding of one’s individuality to know what is meaningful to oneself. Although the term is cliche, I think “finding yourself” is an essential task that will yield great fruits of meaning. Being 17 years old, I can only speculate that a wide variety of experiences would catalyze this process. This entails facing life with an open attitude and courage, not being afraid of experiencing new things and taking the plunge. In scientific terms, by exposing oneself to a variety of stimulus and observing the emotional results, one can begin to postulate who he is. After possessing a fair picture of who you are, you can begin to pursue those activities that you find meaningful. For many people, this means expressing love to others in ways such as donating to charities and volunteer work. For others, it means pursuing a certain passion, such as painting or running. Perhaps it may be a combination of things.

The beauty of human life lies in its opportunity to differentiate life from death by pursuing metaphysical meaning. This opportunity must not be neglected. The amoeban lifestyle must be cast away.